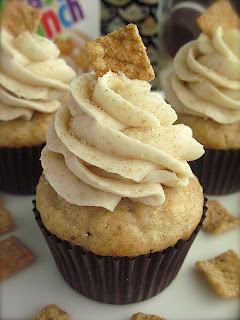 I am a huge fan of Snickerdoodle cupcakes and I saw this recipe on the blog Your Cup of Cake and I had to try it. I thought the recipe was very good, the cake was very moist and delicious and the icing had a great flavor but I did not like the crumbled up cereal in the frosting. It made the frosting very gritty and I am not a fan of weird textures. So I remade the recipe substituting the cereal for just cinnamon and sugar, making them more like a Snickerdoodle cupcake and they were amazing! Here is the recipe below:

3 eggs
1/3 cup oil
¾ cup buttermilk
1 teaspoon vanilla extract
¾ cup sour cream
Vanilla Cake Mix (not white cake mix)
1 ½ teaspoon cinnamon
(There used to be cereal pieces in the batter, but that has been removed due to comments saying it's better without it)
Cinnamon Toast Crunch Buttercream:
8 oz cream cheese, softened
½ cup butter, softened
1 teaspoon vanilla
3 cups powdered sugar
2/3 cup Cinnamon Toast Crunch powder (Crush the cereal in a bag and then sift out 2/3 cup) (This is where I replaced with just a mixture of Cinnamon and sugar, about 1/3+ cup, I kept adding until it tasted just right) 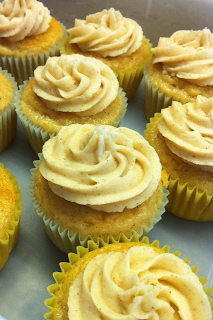 Picture of my "Snickerdoodle cupcakes"